Must be paid in full at time of booking,

Good for 1 year from Purchase Date

During October we fished #LakePowell the same spots in the southern lake each week while checking current results for the fish report. Results ranged from superb early in the month to difficult after full moon.  I am pleased to report that this week’s report is right back at the top of the charts. Fishing success has recovered for striped bass that have been holding in the same locations all month long. They have just responded differently on the various trips at the times that we fished there.  Fishing success has improved over the length of Lake Powell.

First stop on the most recent trip was a short U-shaped canyon with flash flood debris in the back. Stripers have been holding at 60-70 feet at the mouth of this narrow canyon guarding from the deep water area to prevent forage fish from leaving the shallow area and heading for a new location. When these striper schools were found during the first week of October they could be readily caught spooning on the bottom or speed reeling spoons toward the surface with many 1-2.5 pound fish caught. On the next trip no fish were caught. On the full moon trip a few small stripers were caught near the surface.  Then this trip spoons worked on the bottom and speed reeling toward the surface with many fish being caught.  Using the same tackle at the same locations is a good indication of how stripers are responding to anglers on a regular basis.

Our next stop in Rock Creek presented slightly different results. During the first week of October spooning worked great resulting in a huge catch of 1-2.5 pound stripers. As the moon brightened stripers moved from the 60-foot contour into shallower water in this larger bay too wide to be watched and guarded by schools of stripers. Here stripers could be caught occasionally flat-line trolling in the 10-20 foot portion of the water column over a 20-45 foot bottom.   On successive trips trolling was spotty, then good and finally great on this week’s trip. The best lures ran from 8-12 feet where plankton eating stripers were found. Our best luck came on Glass Shad Raps and deep diving Lucky Craft Pointers.

Bass fishing was steady but not fast all month on surface lures and standard plastic grubs, tubes and dropshot shad shaped worms.  Largemouth bass anglers will be pleased to see big mounds of aquatic weeds (grass) growing on sandy bottoms in coves and flats in the backs of canyons. The steady lake level during October has allowed this grass to grow in shallow water without being desiccated as lake level declined.

Uplake, night fishing for stripers with bait has improved in the Bullfrog area.    Here the same spooning and trolling techniques mentioned above work as striper schools are found randomly while graphing the backs of canyons.

Further north more shad are found hiding in the backs of protected coves. Shad schools are much larger here and attract all game fish to the coves. These coves can be found by watching for unusual bird and wildlife activity.   This time of year ravens perched near shore may be watching feeding fish instead of unsuspecting houseboats where a feeding opportunity may occur.  When a shad cove is located expect to find bass, crappie, stripers and walleye in close proximity. Spoons, bucktail jigs, swim baits and crankbaits work well for game fish located in and around these community fishing centers.

Wayne and Crew will be out on Lake Powell during November sampling with gill nets. This will be the last weekly fish report for the year.  After gill netting concludes mid month random fish reports will be distributed on the website at Wayneswords.com.  Look there for fishing information during the winter. You can ask questions about fishing or general information about Lake Powell on the Bulletin Board and get an answer the same day.

See you next year.  Wayne Gustaveson 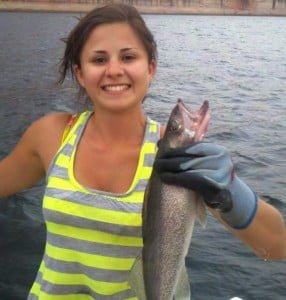 Vicki bags a nice fish, you can too!